The theme for June is Super Heroes and Villains for the Nail Challenge Collaborative. I decided to make a Poison ivy nail art. A female villain found in Batman, which want to protect the nature etc. I decided to make a simplified version. And I ended up liking my non accents the best actually, and overall I'm not that happy with the manicure. I think it was because I was in such a hurry. Anyways, here it is. What do you think? 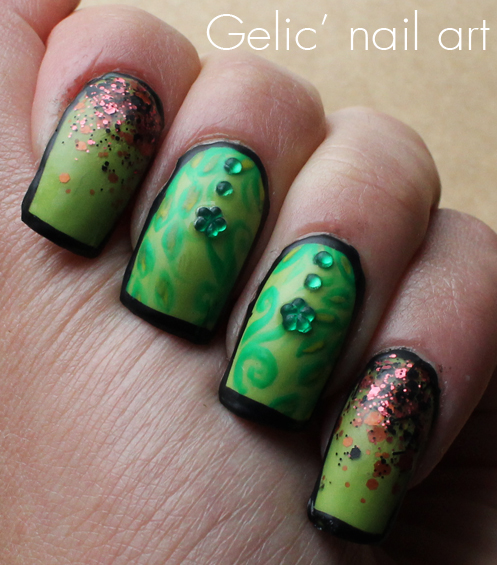 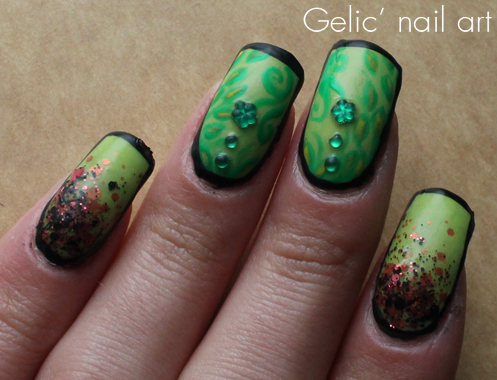 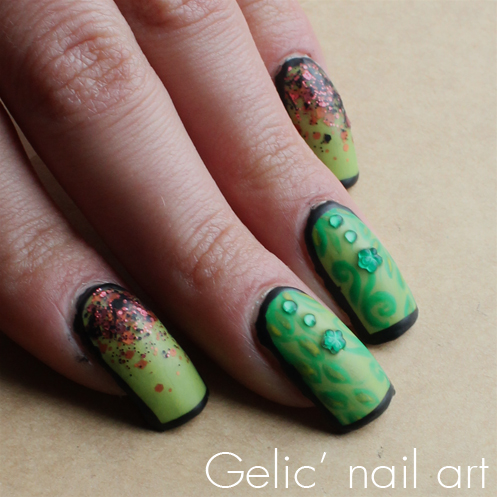 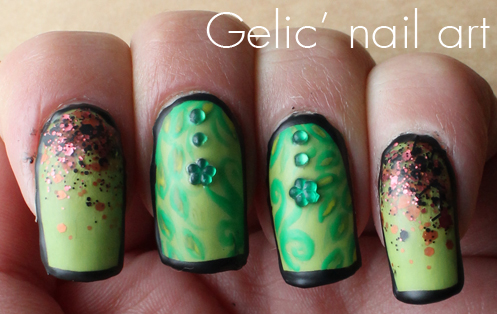 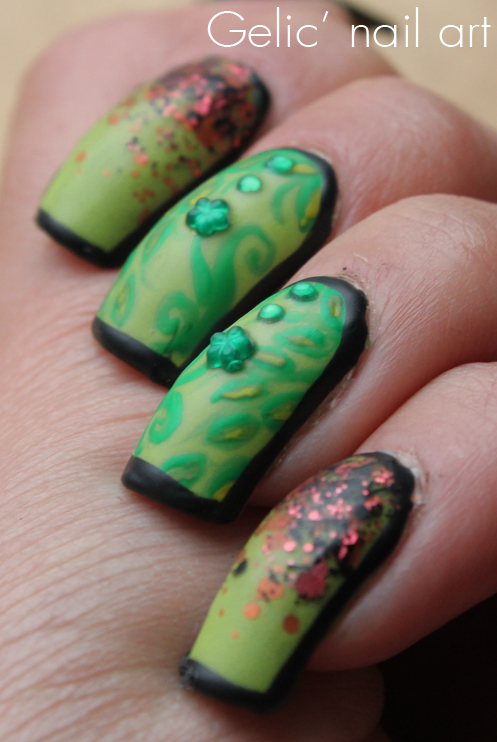 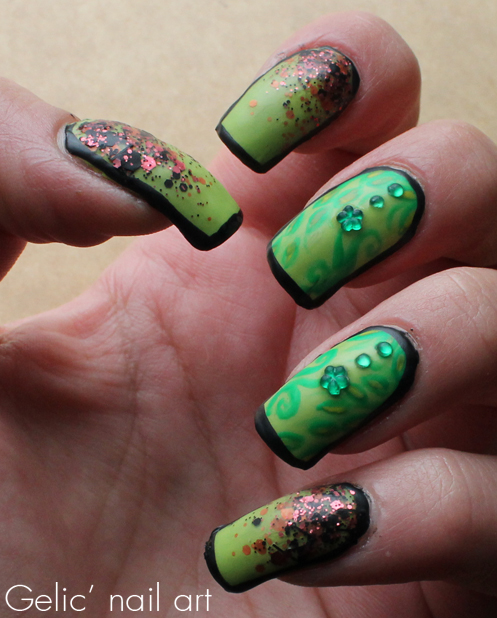 And here is the May summary of the Nail Challenge Collaborative, with the theme Spring flowers.

I think the tulips and the stamping are my favorites, then the wood anemoes, lastly the abstract thingy. 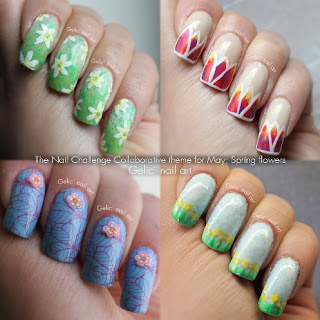 
Which ones are your favorites if any?
Posted by Gelic at 1:03 PM 6 comments:

I forgot/time slipped away and the summary of April's Nail Challenge Collaborative went missing. The theme was Recreating member designs and I had a blast. My favorite is the square geometric b&w nail art, then the b&w rose nail art, the leo mani and lastly the gradient. Which one are your favorite?? :D 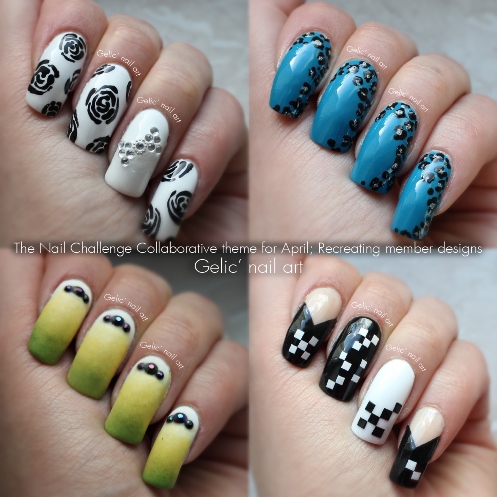 Almost Good As Gold has shredded prismatic gold glitter/flakes in a clear base. Here I've layered it over HM - Capri Breeze and I used 2 dabbing coats, but I actually liked it better after just 1 coat. The flakes are of the "harder" type so 2 coats of top coat could be needed to get a super smooth surface. This is also my contribution to blue monday, the mani is quite blue, even though I'm talking about the flakes. XD 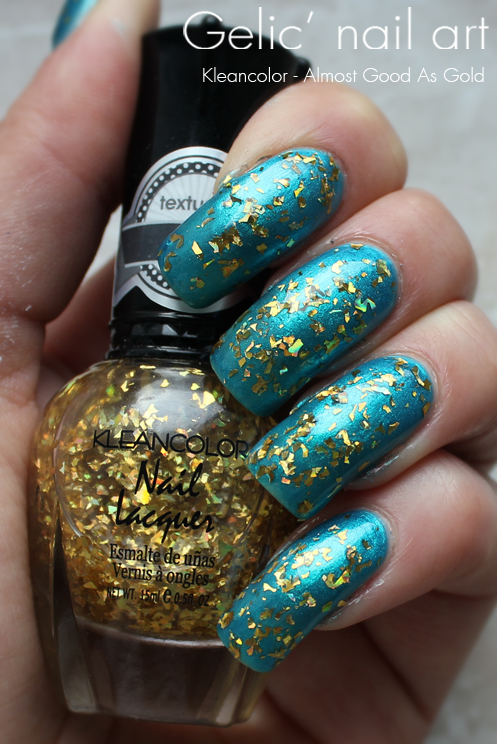 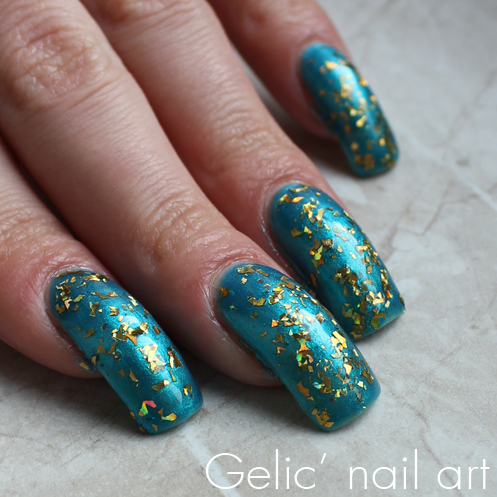 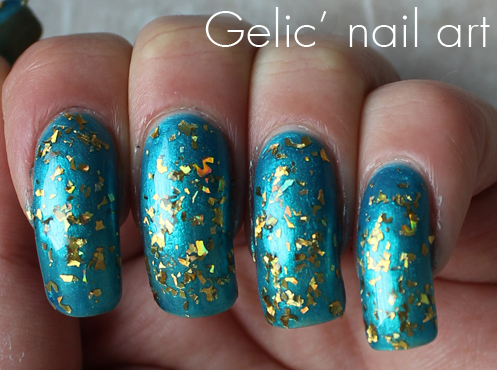 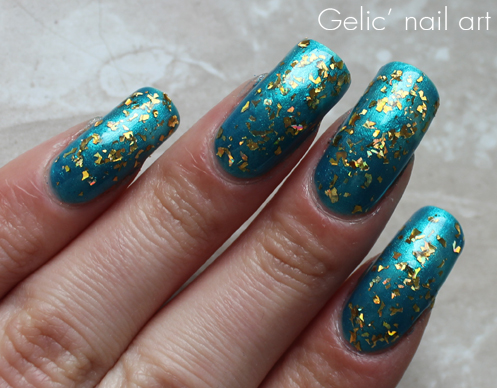 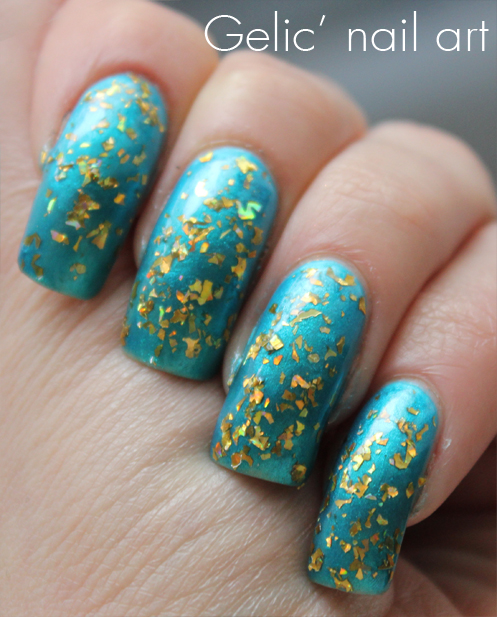 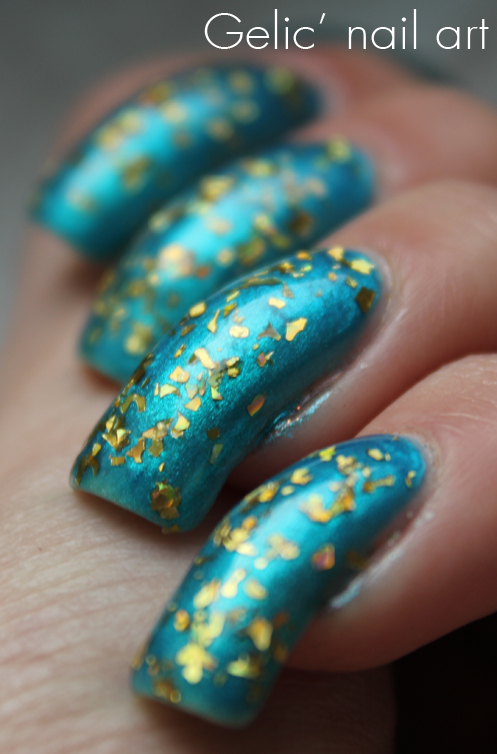 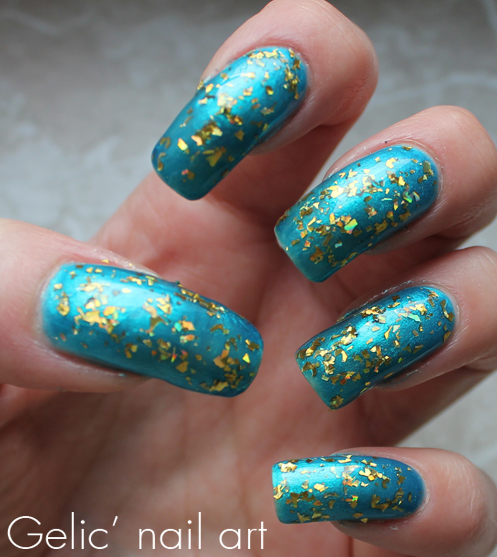 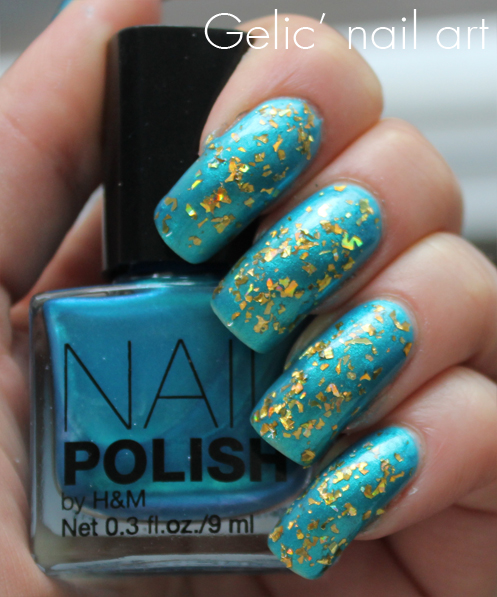 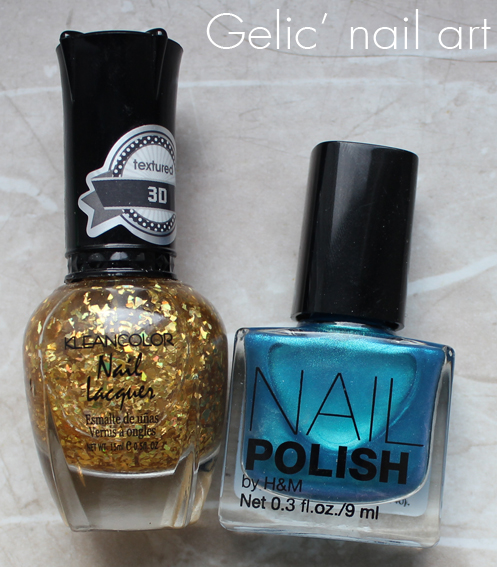 I bought the Kleancolor on Ebay for about 2 euro with a bunch of other of course. :) The HM polish was 3,9 euro in an HM store.
Posted by Gelic at 4:08 PM 10 comments:

Today it's the Swedish National Day. Sweds aren't that nationalistic for different reasons and celebrations aren't that big comparing to other countries. However I have some suiting nails for the occasion, which I had on in Germany last summer in the end. Blue and yellow are fun together, I want to make more designs with that, not because of the swedish flag, but because the colors compliment each other well.

I made a yellow base, after that I stamped the shit out of my self, each nail is stamped like 4 times to get the "full mani pattern". Then I added a gold metal stud tear drop rhinestone on each. First I have camera photos, but in the end I have some phone photos, just because those showed the color better, the camera made the color too popping. Hope you'll like this. :) 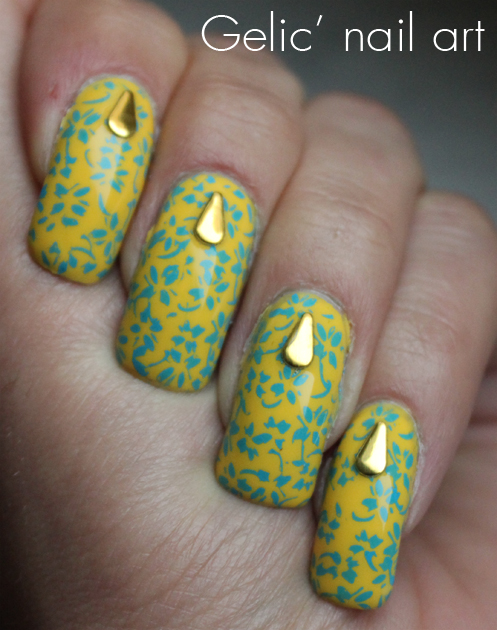 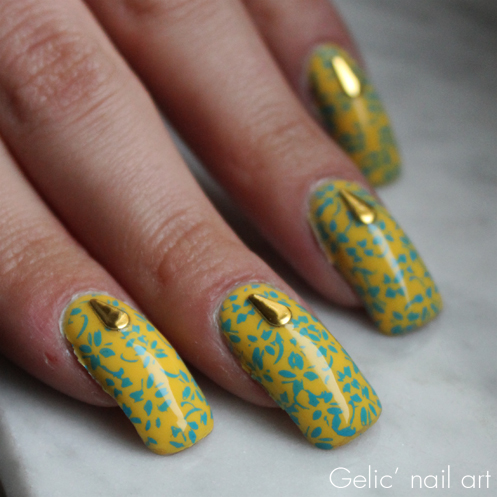 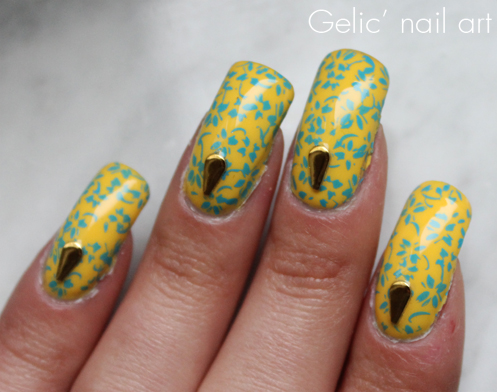 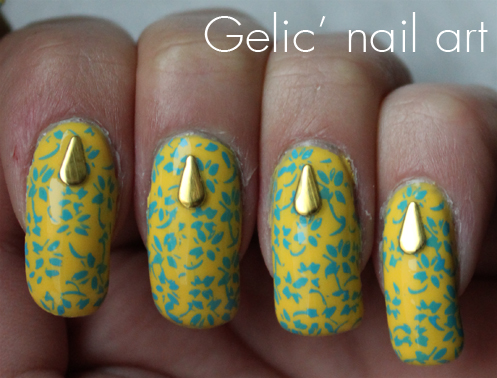 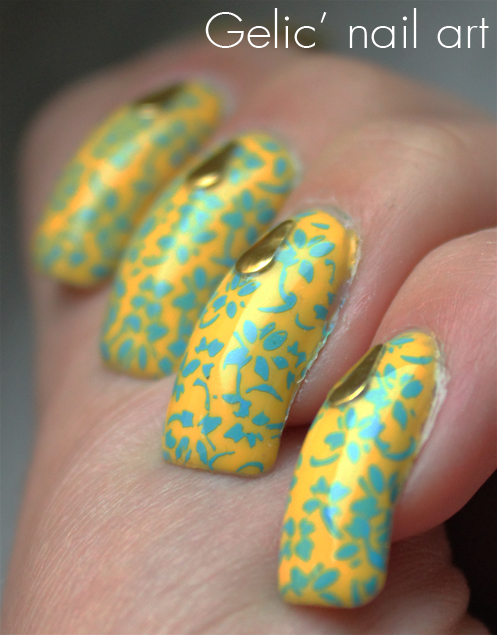 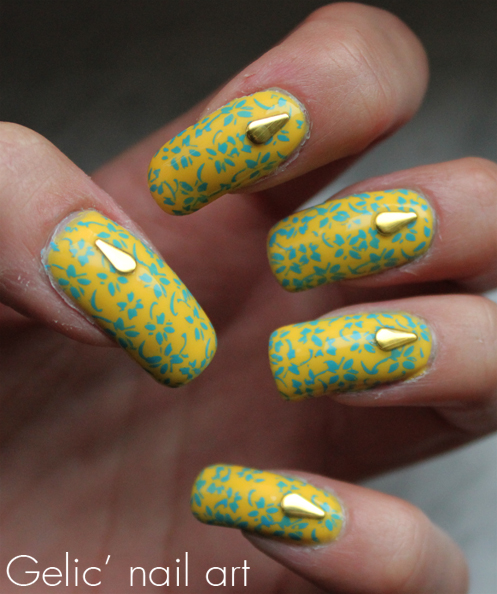 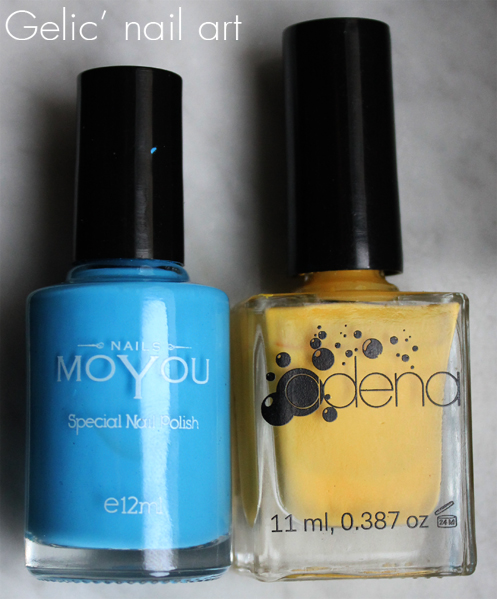 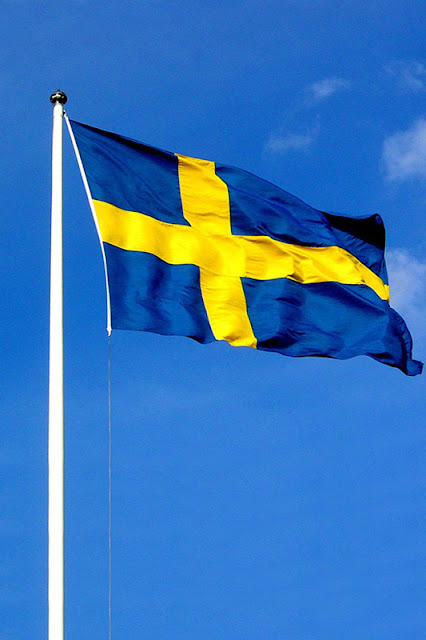 ***Some products in this post have been provided for review***
Posted by Gelic at 2:45 PM 18 comments:

Hi, time for another polish remover review. As I've said before I'm a 100% acetone girl, my nails like that and to be honest, polish remover with a lot of perfume and crap in makes my nails drier than just acetone. From some acetone free polish remover I've actually gotten allergic reactions.

But anyhow, because of my German visit I've tried some nail polish removers. I've talked about

Essence nail polish remover - coconut + papaya before and comparing all four, Essence is still the one I don't recommend, at all. All three below remove polishes better, smell better and all except KIKO is cheaper than the bad smelling Essence version.

I've used multiple bottle of those below so I feel I have quite a good view of how they work. And I'll explain some more under each picture. 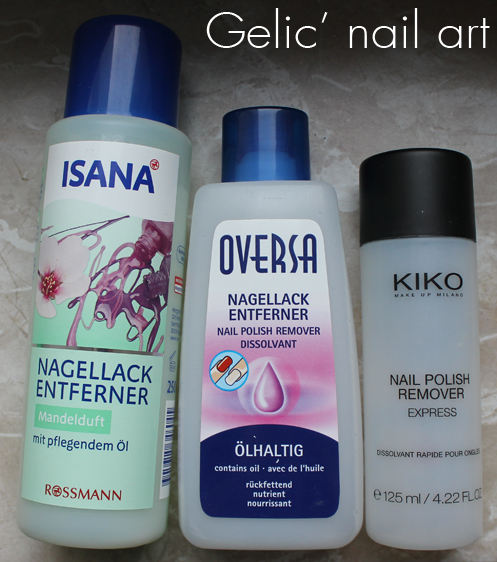 Isana nagellack entferner (=nail polish remover in german) is the cheapest of the bunch because of the large bottle which is 250 ML. (Also found in smaller bottles). The price at Rossman is about 0,8 euro.

The color of the liquid is a muted light green and the scent is mild and pleasant, "mandelduft" is the scent which is almond scent. I don't imagine anyone being annoyed by it.

Isana has oil in it, of all three, Isana has the middle amount of oil. On the fingers the oil isn't noticeable in a bad way and it works for removing polish from stamping plates even though there is tiny drops of fat left (I'd recommend 100% acetone for stamping image plate removal, but at least this works if you don't have acetone available.)

The main thing, removing polish it works fine. It's not like acetone, but it's quite efficient. If acetone is 5-10 minutes this one is about 15-20 minutes depending on amounts of coats, glitter etc.

As you can see above the main ingredience is acetone, then aqua caprylic/capric triglyceride, parfum, limonene, coumarin, alpha-iso-methylionone, ci 19140, ci 42090.

Oversa nagellack entferner is the one coming in second in price range. If I don't remember wrong the price is about 0,8-1 euro at Kaufland and with it's 200 ml it's actually cheaper than Essence (150 ml)

The color of the liquid is light but bright blue. Oversa doesn't claim any specific scent but the scent is close to what clothing smells like after you have washes them (fresh) or slightly like unsweet sherry. So I really like the scent, as Isana it doesn't over take a whole room with smell.

Oversa is the oiliest of the bunch, which it also claim on the bottle to be. I don't recommend this one for cleaning stamping image plate (it removes the polish but leaves a lot of fatty residues).

Oversa is pretty much the same as Isana and removing polish it works fine. And again, it's not like acetone, but it's quite efficient. If 100% acetone is 5-10 minutes this one is about 15-20 minutes depending on amounts of coats, glitter etc.

The main ingredient is acetone, then aqua caprylic/capric triglyceride, parfum, ci 42090. Which means the same stuff as above, but less in the list.

KIKO Express is the most expensive of these three (also more expensive than Essence) with 125 ml and a price tag of 3.90 euro. This one is bought in a KIKO store, and can be found on their website but not in regular stores (of my knowledge).

This is the acetone version from KIKO, which they call "Express" and the color is light blue. There is also a pink "Universal" remover and a purple "Gentle remover which both are acetone free. The scent is an indefinable quite mild chemical acetone scent, which doesn't smell bad but there isn't anything else to say either. It's okay.

I'd say that KIKO Express it the least oiliest of these three, or maybe the same as Isana. Some small oil residues on stamping plates, it works for it, but 100% acetone will always be best for that.

And again, about removing nail polish from the nails, it's not like acetone, but it's quite efficient. If 100% acetone is 5-10 minutes this one is about 15-20 minutes depending on amounts of coats, glitter etc. I actually for a while thought it was better than both Isana and Oversa, but I recently bought a new KIKO Express and removing wise it's the same or even less good than Isana (but that would be knitpicking).

Thought that this would be a short post. LOL. Of all the three I can recommend all of them, they are pretty equal. But if I had all three in front of me I'd pick Isana the first. Isana is the chepest and has a pleasant and mild almond scent and is efficient. After Isana I'd pick Oversa, just because of the price over KIKO. I'm still not recommending Essence at all, there is cheaper and better alternatives (sorry for that people ;) ).

What do you think? Thoughts about something?
Posted by Gelic at 3:34 PM 8 comments:

Hi! Long overdue, here is the full collection of P2's Crisp Color collection from spring 2015. I ended up buying all eight, just because I really wanted some matte textured polishes and a full collection is always fun. Each bottle is 2.45 euro at DM (Drogerie Markt, found in Germany). 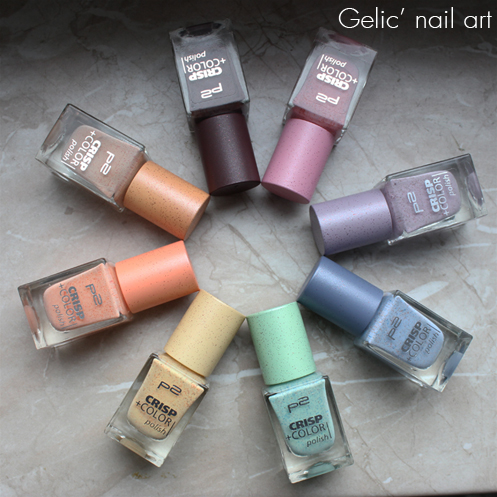 So, a general summary then. There is 8 colors and all of them, except for the brown, has been seen before, as dupés or very similar in other brands like KIKO, BeYu, LOOK etc. So basicially there has been plenty of opportunities to grab them.

All except the brown has a pastel feel to it, white has been mixed into it combined with colors. The brown is more of a jelly based polish and I wouldn't even consider it to be pastel.

All except the brown needed two very simple coats. Some of them are almost onecoaters, but they kinda need that last second coat to cover perfectly. The brown being more of a jelly needed three coats.

Drying time is  normal for the textures, like 25-30 min (since you know, no tc is added because that would ruin the effect, I haven't tried drops if that makes the drying time faster though). I think that the brown needed 30-35 minutes and that probably because of that third coat messing the time up.

All of the polishes has shredded matte particles in different colors, which looks like hard plastic but I' not sure. However they do look cool with it. There are three combos of shredded particles color combinations as below in this collection: 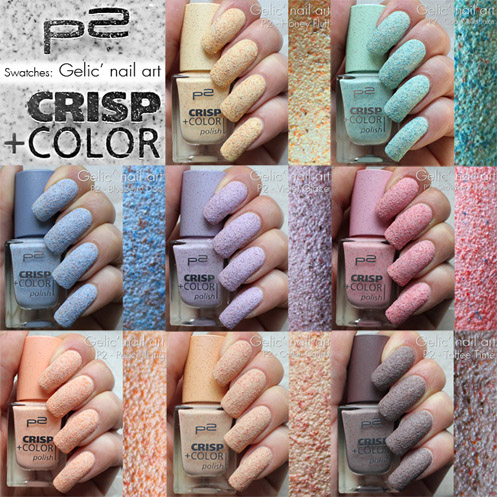 And deciding which ones I like the most is very hard but I've tried at least, and my choices are only based on my own colors of liking and I might change my mind another day. So as you see, the purple I liked very much, closely followed by the blue and the yellow (the yellow would have been no one or two if it would have been more brighter). The green is cool and minty but I'm also (for a change) drawn to the cute and bright pink as well (They could swap places in my list). After that we have the two pastel orange and the brown. And to be honest those three are much the same to me (I know a lot of people might disagree), but I'm having a hard time with pastel orange.. The more nude orange is maybe better but it also reminds me of rust protection spray.. And I actually like the brown, not because it's pretty, but because it's unusual and I'm thinking of some cool nail arts with it. ;) So it's that too, wearable on it's own only, or not wearable on it's own and nail art combination possibilities too which is part of my choices.


And for fun, how would you arrange these, from top to bottom, which ones you like the most? And also if you have some nail art thoughts about these? I have some plans but fun if you have too. :)
Posted by Gelic at 12:24 PM 14 comments: