Hi! It's Lelack's Nail Art Sunday and the theme is easter! Which fits perfect since it's easter now. ;)

I've done a cartoon chicken funky french as my easter nail art and below you have the result:

Happy Easter everybody! Hope you've all had a nice weekend!
Posted by Gelic at 11:28 AM 26 comments:

Here I have Everybody Loves Penguin. I don't know what's penguin about this and maybe it's not so easter either but there's yellow glitter in it so it counts. ;) 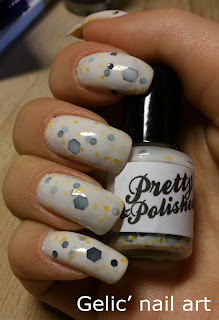 This is 4-5 coats and still some VNL but not like if it's bothersome. 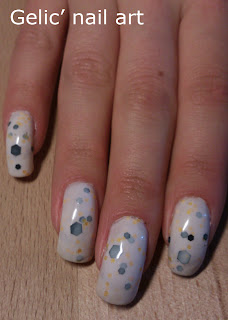 The polish has a white jelly base with yellow smaller sized hexagon and two sizes of black opaque hexagons. The yellow hexagons are semi shiny, metallic looking but not shiny like regular glitter per ce.  The largest of the black are 4mm and not that common, and I needed to do some fishing and some what placing of them. 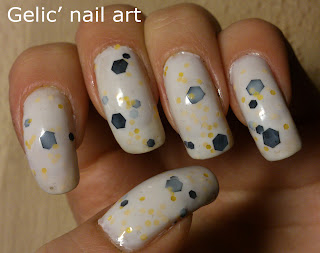 I really loved this polish, the only sad thing is that it needed so many coats because I think one manicure needed about 1/5 or 1/6 of the whole bottle which was 5ml. I will try getting my hands of a full-size bottle if possible (There where no large ones available last time). Maybe I'll use it for layering the next time because as I said I really likes this color/glitter combination. 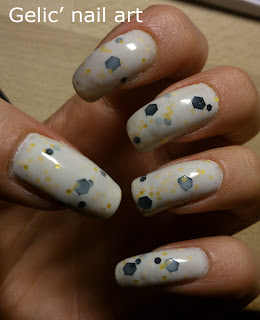 For safety I used two coats of SV so the black large glitter wouldn't stick up from the surface, even though they sunk in surprisingly well in the polish.
Posted by Gelic at 4:38 PM 2 comments:

For today I have a lovely yellow creme. I bought it because I'd read that it was a two coater, and because I love yellow ;) 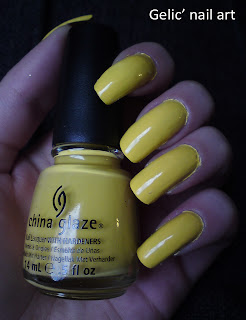 However I ended up needing three coats for my nails for this. Maybe I made them too thin. When I did a nail art with them I needed just two so I guess it depends on how thick the coats are. 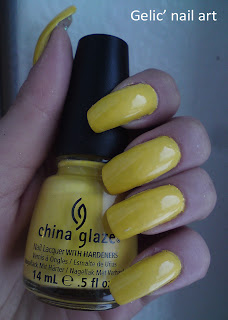 The color looked a bit colder in the bottle than on the nails where the polish appeared warmer. 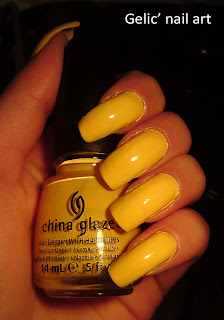 I'm really happy I bought this though, it's my first(!) CG bright yellow. :) I want to buy more of them though, I would like to find more nuances. And maybe some cremes with shimmer in like the one I saw yesterday at ClawsInColor. 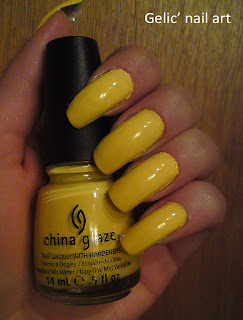 Hi! I'm going on with my little easter theme this week. I tried googeling why the easter is suppose to be yellow but couldn't find a reason good enough but anyhow, here I have a yellow and black nail art. And as you can see of the length and shape of my nails, this is archive nails! 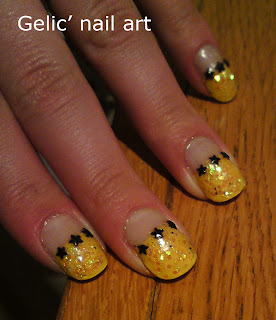 Basically I've made a yellow base and then applied loose yellow glitter on top of the yellow. And on top of that I've placed three black opaque star rhinestones on each nail. 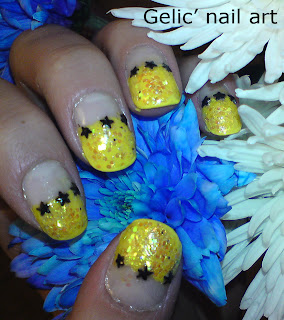 This looked way better irl since the yellow loose glitter changed color from pink to green to yellow. But you can imagine, right? ;) 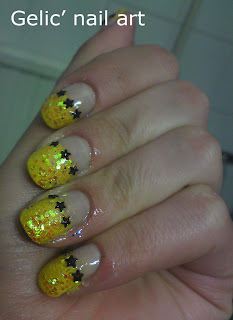 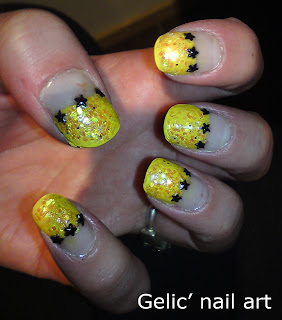 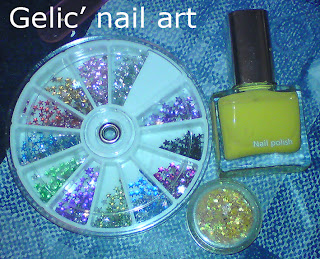 Pretty and Polished - I'm Not A Banana, swatch

I was thinking of having a easter theme this week on the blog, since easter is coming up. So the blog maybe will be more yellow and spring like than usual even though I don't think yellow is just for easter. I were yellow all year around, but I figured that easter could be a excuse to show it more. ;)

For to day I have this yellow jelly polish from Pretty and Polished called I'm Not A Banana. 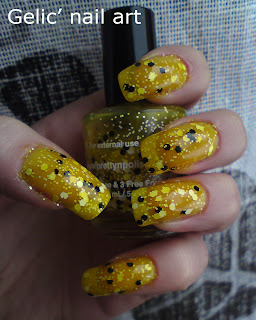 The color shown on the photos feel color accurate and the yellow is of the darker kind, at least on my nails. It also has three sizes of glitter; white small glitter(maybe mini hexes?) and larger white hexagons and black hexagons in the same size. Whit the coats some white glitter appear yellow which is really cool. 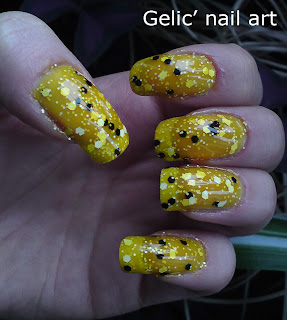 Did you notice the VNL? Yea, I figured.. this is four coats but it reached its "full opacity" by two coats. But a jelly is a jelly and I knew that it wouldn't cover so well. 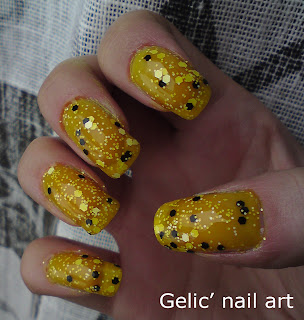 The formula was a bit thin and I had some problems getting glitter on the brush and had to place them since for example I had for some reason got only white glitter on one nail. ;) 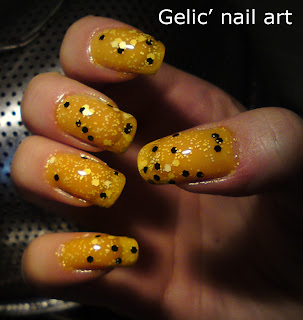 I don't think I'll wear it like this alone again, I like that it feels ugly and beautiful in the same time but it's hard not to look at the nails and think that they are super stained with that nuance of yellow. 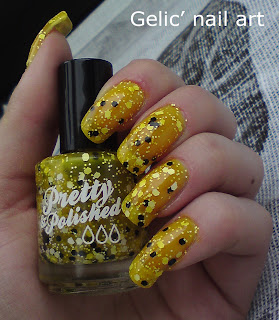 However, I know for a fact that it looks amazing layered over lighter shades so this bottle will be used! I've also have ideas with seriously cool nail art with this in the future so in the end I really love "I'm Not A Banana"
What do you think about this? Do you see the potential like me or is this just horrible with the vnl?
Posted by Gelic at 9:43 AM 18 comments:

Liquid sand jelly sandwich, is that correct to put it out like that? I mean liquid sands are jelly if they have top coat and if I put something in between and make a sandwich of it it probably is a jelly sandwich, just textured. Or should I call it Textured Jelly Sandwich? Yea, I liked that! Remember where you heard/saw it first! ;)

Anyhow, Blue Monday at Lindas Nailorama and this manicure surely is blue! 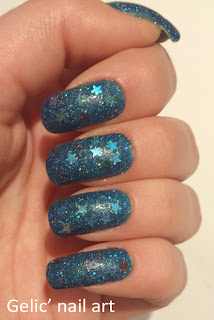 I basically painted on some stars over OPI - Get Your Number (GYN) and then a coat of GYN again, like a jelly sandwich. Above it hasn't yet fully dried. 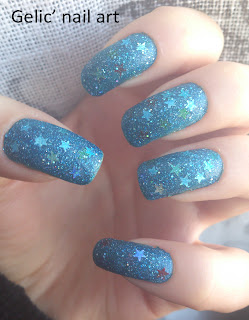 The result was darker than the "normal" color of Get Your Number because the star polish made the polish wet and then it gets darker. When I added more GYN the base was dark and it didn't change. 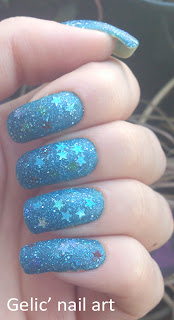 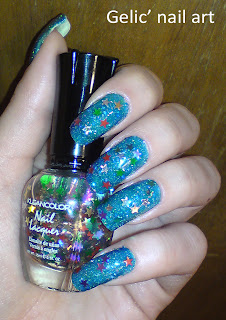 The star polish I used is Kleancolor - Blind Date. I think I used about 2 coats of dabbing to place the star some what even. I liked that the star glitter was really thin and didn't stick up much from the polish like some glitters do. 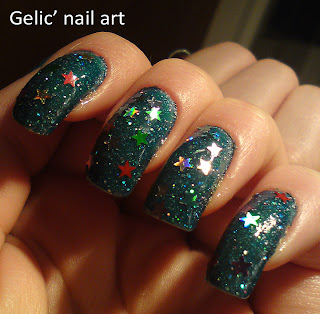 It was quite cool this way too. It looked super jelly and the prismatic glitter really gave a dept to the polish. 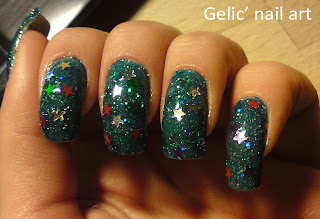 It's Lelack's Nail Art Sunday and since the theme was free I wanted to show a nail art another of the participants of Nail Art Sunday once showed. When Drops Of Color showed her block nails, I knew I wanted to do the same but in other colors. Said and done, here it is, in black, purple and pink: 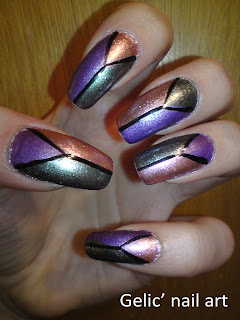 Swatches of all three polishes can be found here >LINK<. 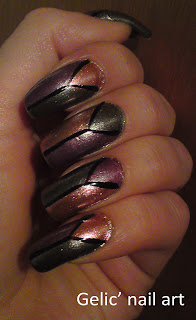 My only problem application wise was that I had to paint two coats on each block because otherwise the base color shined through. 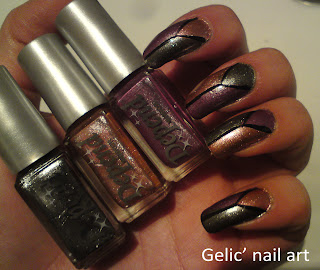 I love duochromes and for this there's no exception, I must get my head around and swatch the rest of this collection. To check out W7 - Metallic Venus, click the >LINK<.

But now I going to talk about Metallic Neptune.

Metallic Neptune is a dark duochrome polish. In the bottle it ranges from green, to teal, to blue, to purple, to pink and to that some sort of yellow shimmer color.
On the nails the base is green to teal lingering of to marin blue and then dark purple. Even though it's very dark the polish never looks completely black. The pink and yellow is not there to find, at least not on my nails. In the whole my thoughts goes towards ink or oil when I look at my nails.

The application was perfect and it covers in opposite with the other W7 from this collection in just one coat!


Under the lamp it looks green/tealish.

When I took this photo below it was snowy and cloudy but I can't wait to try this on in the summer when there is sun/clouds because I think it might look better then.
I really liked this. Do you have any thoughts about it? Do you prefer dark or lighter duochromes or do you like changing depending on how you feel?
Posted by Gelic at 3:54 PM 10 comments:

I almost forgot, I  promised you to show you something more holo-like today and here it comes.

For some time ago I showed you this nail art and after some days I wanted to revive it with some "holo top coat". I actually like this better without holo but I thought I could show it to you anyhow.

The holo top coat isn't a real holo top coat, it's Catherine Arley - 667, a very light gray holo. But since it so thin one coat just gives a holo spark to colors, here two maybe was too much.

As I said I preferred the original better this time but it's always fun experiment. :)
Posted by Gelic at 10:58 PM 14 comments:

Hi, It's Friday and Skimmerskuggan's Holo Friday, so if you want to check out more holo rainbows you better check her out because some time to night she'll have a link list filled with blogs showing holo.

I'm showing Color Club - Angel Kiss from the first collection of Halo Hues. It's a pale blue and as the other from the collection it's super holographic with rainbows in what ever light you're wearing it in. And yeah, one coat as well. Pure perfection!

I've tried to include so many light conditions as possible to show some range of the polish. Hope you liked it!

Later today there will come up another holo post, so don't forget to check it out ;)
Posted by Gelic at 1:08 PM 14 comments: