This is another Pastel from Kleancolor, this time Pastel Teal. It's basically a light blue with a hint of green in it, making it teal. Normally I'm not that in to teal polishes, but this one is so bright even though it's teal so I really like it! 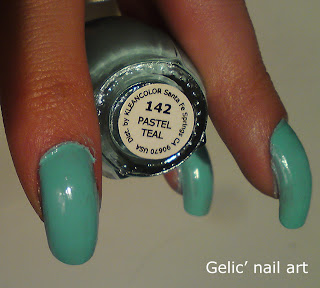 Pastel Blue, which I showed you yesterday demanded two coats. For this one I also used two, but on my index and middle finger I used two thick coats and on my ring and pinkie I used two thin coats. As you can see I should have used three coats on them. For this time it didn't matter since I used it for a nail art. but still good to know. 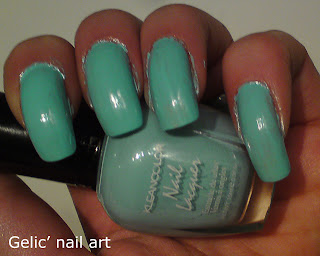 Another thing, doesn't the bottle looks a lot more blue than on the nails? Weird ha? On the nails it looks correct on my screen at least. :)
Posted by Gelic at 2:36 PM