Nail Art Sunday again, and the theme for today was Converse, since Lelack wanted to compel spring to arrive. I must admit I wasn't stoked over the theme, I'm not a converse person but I've seen some people which look good in the shoes too. First I aimed for something that would be a free interpretation of Converse. Maybe some other spring sign? Spring flowers? Any other shoe? The city Converse in Texas? Texas? America? converse as in conversation? Maybe do something graphical of a cool converse shoe? Maybe something graphical of the all star-logo? and etcetera. And then I chickened out, saw a cool converse nail art and remembered that I had an aubergine colored polish untried bought in Turkey about 4-5 years ago. And figured that it would look cool for this nail art. I also figured that it would be cool since the only time I've been close of buying converse like shoes, it was a purple high heel converse.

Enough rambling and on to my nail art. We can put it like this, I'm not that content over the lacing, it looks if a child did that,  but I promise, it was me! ;) haha 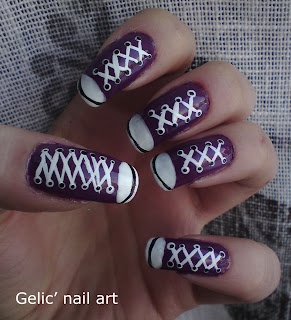 I like my thumb the best and if I'm going to redo this some time I'll make the lacing more like that. 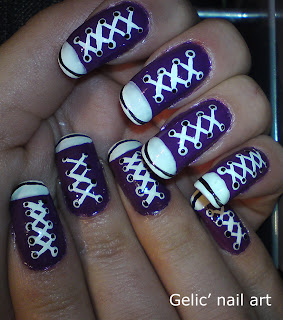 And yes, all then nails got conversed, I had a plan that this would look cool and I'd were it for some days. Now I'm not sure but they've yet not been removed anyhow. I mean I do like laced nails. 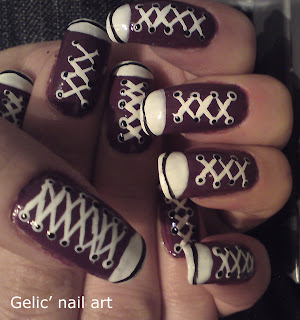 I'll show better shots of the purple polish some other day. It actually looks different in different lights but I think the one below, the picture at the very top and the bottle picture looks most accurate. 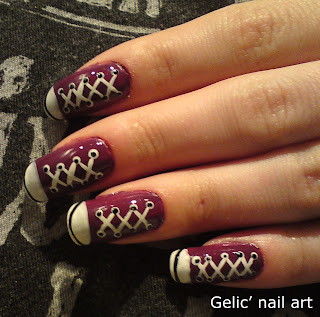 And here above you also see the Converse Heels I almost bought. (and I realize I still want..) 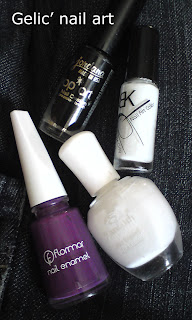 This manicure is actually very "foreign" in all ways. Converse shoes are American, the purple is Turkish, I think Jordana comes from America, the white fine liner is from Hong Kong and the white large bottle is from Crete.