I've been drooling looking at metal stud rhinestones for some time now and when Born Pretty Store asked me to review the studs, the answer was simple. I'm that kind of girl who likes studs on clothing, shoes and jewelry making it edgy so adding them on my nails where a natural step. I knew I wanted to make something unique, edgy and with some sort of rock twist and googled around to see what others had made and realized that there weren't that many variations of nail art with it.

Since my square stud rhinestones where in gold I decided to use gold, white and black nail polish in my nail art design. I also wanted to make a nail art with many accent nails but still very connected to each other and this is what I came up with: 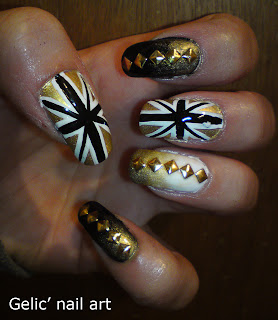 Above is my left hand with the brittish flag in gold, white and black on my thumb and middle finger. On my index finger I have a black base with a golden gradient starting from the rot of the nails and embellished with the gold square studs. On my ring finger I have a white base and a golden gradient starting from the tip of the nail and then embellished with the golden studs as well. I really like how this came out! :D 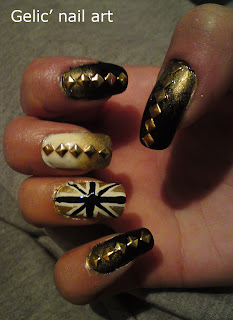 Above is my right hand and as you can see, there's one brittish flag nail and three black nails with the golden gradient and one white nail with a golden gradient. 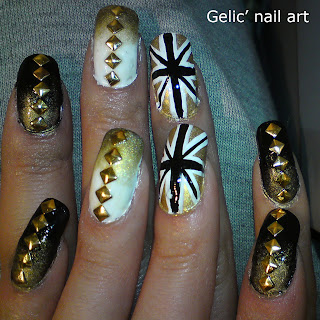 Also worth mentioning is the gold, which is Catherine Arley - 807.."aah holographic polish" you might think, however mine is from the less holographical batch and this barley got any holo in it, however I think that it looks amazing in the gradient over black and white and I believe that's all because of the holo in it creating depth.

Below you can see the bag I got and as you can see there's a fair amount of metal stud rhinestones in it! This is the one filled with gold studs, the thing appearing silver is the background of the studs which of cause hasn't been painted gold. 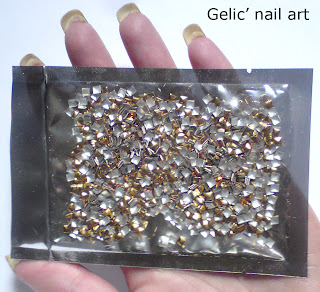 And application wise, I used base coat and then one layer of black and two layers of white polish because they just needed that to cover. After that I'd applied one coat of top coat on one finger at the time and used a dotting tool (dipped in some top coat) and placed my square stud rhinestones where I wanted them. I think that it's important to really press down the rhinestones into the polish so no edges sticks up. Then I applied two cots on top coats to seal in the design. I think these just mentioned steps are very important when using these 3MM square studs because otherwise they will likely get stuck in some sweater fall off! And we wouldn't want that, would we? I believe that it's better with 2MM's if you have very curved and slim nails.

I wore this nail art for 5 days to really check how the metal studs worked and as you can see from the picture below, some tear and wear shows. The golden color of the studs has gradiently turned into silver at the tips however a part of me thinks it looks cool and I guess that it could be prevented with top coat every other day. 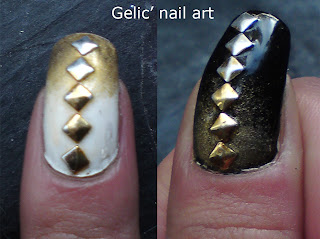 These studs can be purchased here for $5.84. They have free worldwide shipping on all orders and if you use my code NGL91 you'll get 10% off your order. With the 10% off that is ~$5.26/37SEK and in writing moment even cheaper than what's on ebay, so if you like them it's a great deal. The 3MM gold square stud rhinestones in this post have been provided for review. However this has not affected my opinions about the product. My opinions can't be bought and I always express my honest opinions.
Would I have bought it if it wasn't provided to me: Yes.


***Some products in this post have been provided for review***
Posted by Gelic at 7:00 AM