Oh yikes, I'm slow with today's post and I really doesn't have a good reason why. I really wanted to show and try some of my Catherine Arley's but the sun is no where to be found so let's look at something from the archive. I found Cosmic Dust from China Glaze's latest holographic collection; Hologlam. By now you've seen all of these polishes multiple time but here you'll hear my opinion about it. This also qualifies me for Skimmerskuggan's Holo Friday. 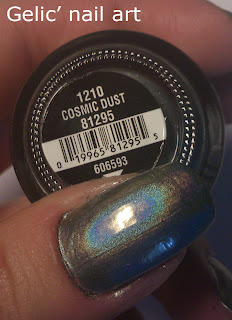 Cosmic Dust is a dark silver colored holo, pewter would be the correct name for it I guess.

I was a bit disappointed at first, the formula was very thin, I was near splatting drips on the table several times and it demanded 3 coats and it wouldn't done any harm with a 4th coat as well.
After it had dried every thiny defect on my nails showed extra well.. which I've normally don't have a problem with. Feels like I must buff my nails seriously before I try this again!

Above you see the color with out the rainbows, actually quite nice like that too.

The good thing is that the holo is better than expected, on the nails it looks way better than the bottle!  Even in lamp light it actually looks really nice. Linear and beautiful.